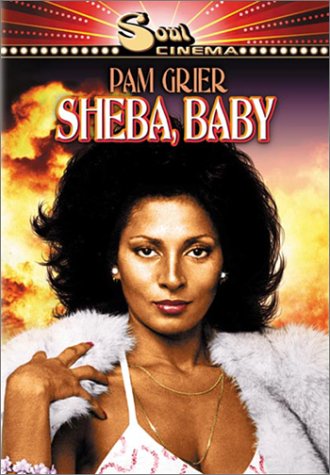 Queen of the Private Eyes

William Girdler, director of such films as GRIZZLY, DAY OF THE ANIMALS (where Leslie Nielsen does battle with a bear – and it’s not even a comedic role!), THE MANITOU, and ABBY, takes a dive into the blaxploitation genre alongside bombshell Pam Grier. Does his film stack up against other blaxploitation classics? Let’s take a look and see:

Rudy Challenger, who plays Sheba’s father, is having trouble with gangsters who want to take over his loan operation. Alongside him is Austin Stoker, which exploitation fans will recognize from ASSAULT ON PRECINCT 13. Challenger gets beat-up pretty badly as he makes a stand against the mob and this brings along Pam Grier.

Grier, starring as the title character, leaves her Chicago job, where she’s a private detective, to return to Louisville, Kentucky to help her father. Against her father’s wishes, she begins her fight against the mob.

Standing at her side is Stoker. There’s a bit of romance (though Grier doesn’t get naked) between the two as hell is exploding all around them.

Meanwhile, at the loan shop, gangsters burst in to shoot the place up. There’s a firefight between Grier, the bad guys, and the cops that leaves one gangster wounded. It was pretty sad to see him begging for his life as Grier has her gun pointed at him. In one of the film’s more poignant scenes, Grier is told by the police to release her pistol. She does, but slowly. You can feel the pressure of her finger on that trigger ever so leisurely release her grip.

What really gets the film moving is a scene where Challenger finally succumbs to the gangster’s wishes. As he tells them he’ll sell out, Pilot, who is one of the main bad guys, tells Challenger that it’s a good thing because he’s set a bomb detonator on his car. Well, wouldn’t you know it but Sheba is getting into the same car as her father is on the phone. Alongside him, Stoker manages to get Sheba out of the car before it explodes.

This leads Grier to start working her way up the ladder towards Pilot. After getting some information from an unintentionally funny pimp, Sheba takes off after the bad guys.

In a scene set in a carnival, where Sheba is chased by Pilot and his henchmen, she finally gets the information she needs. Pilot is working for a man named Shark, the main baddie, who is hiding out on a boat on the Ohio River.

Grier visits Shark during a party he’s holding on his boat. While she’s there, flirting with Shark, she gets into a sexy catfight with one of the other ladies. It’s always a pleasure to see Grier whooping some female butt! Unknown to her, though, Pilot is also on the boat. He points Sheba out to Shark, who immediately calls for her capture. Grier manages to escape and swims to shore.

While there, she slips into a tight wetsuit that shows off all her curves. It also helps that she keeps it zipped down, showing off her cleavage.

She swims back to the boat but is captured by Shark’s men. She’s tied up and forced to watch as Pilot is dragged to his death behind a speedboat. She’s then taken into the hull, where she’ll await her own death.

Flirting with Shark, Sheba manages to escape after she kicks him in the groin. She hops into her own speedboat as the police begin to converge on Shark’s boat.

Shark, who has his own speedboat, begins to flee. This all leads down to a scene where Sheba, who has lost her machine gun, picks up a spear-gun. She manages to kill Shark with one deadly shot that goes through his chest.

At the end of the film, Grier turns down Stoker’s invitation to stay in Louisville, and returns to her Chicago operation.

Now, you might think I’ve spoiled the film for you, but that truly isn’t the case. You’ll see all of these events unfold minutes before they do. There really aren’t any surprises in this film.

Girdler, who is a Louisville native, returns to his Kentucky roots with SHEBA, BABY. It was fun seeing sights that your reviewer, who is also from Kentucky, sees on a regular basis. Girdler also directed THREE ON A MEATHOOK in Kentucky.

However, his direction here is flat and emotionless. The scenes are tedious and boring. Even when there’s action on the screen there’s nothing that will hold your attention. The entire feeling of the film will leave you thinking that it’s little more than a made-for-TV movie.

The film received a PG rating and that’s only because Grier doesn’t reveal her breasts. She even has a sex scene with Stoker that’s just blah. There’s plenty of killing, but it’s all relatively bloodless. Even the ending shot (no pun intended) where Sheba kills Shark is played down.

Pam Grier, however, does her best with the material she’s given. She’s still a bad-ass black fox as she mows her way through the mob.

It’s here that I have a problem. Sheba flies from Chicago to Louisville with quite an arsenal of weapons that includes machine-guns. I know that in today’s world there would be no way you’d carry guns on a plane, but even in the 1970s I don’t think you’d get away with it.

Though this film is pretty bad, you could do worse. If you’re a Pam Grier or blaxploitation fan, you owe it to yourself to check it out. However, I’d start with some of Grier’s better work. Watch COFFY, FOXY BROWN, or even FRIDAY FOSTER, before you get to this one.

Unfortunately, there are no good one-liners in SHEBA, BABY for me to leave you with. And that’s really no surprise since the film is so bland. PG-rated Pam Grier simply doesn’t stack up (like Grier herself).

So watch this one simply for Grier in a tight wetsuit. That’s enough unto itself to give this film a recommendation.