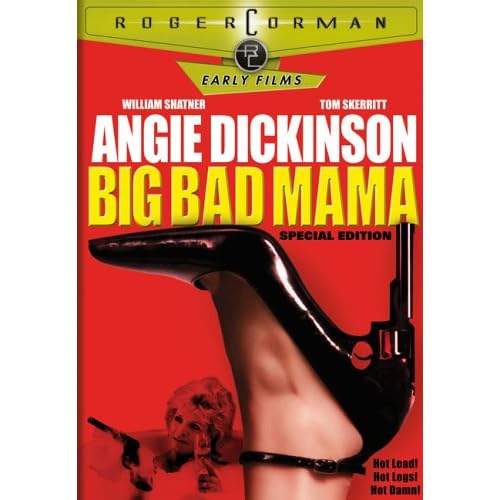 Men, Money, and Moonshine
When It Comes To Vice, Mama Knows Best.


Roger Corman (a name instantly recognizable to the faithful drive-in viewer) serves up this 1974 vehicle starring Angie Dickinson. Should you take the ride with the Big Bad Mama as she traces her way to California amidst booze, bullets, and boobs? Read on and find out!

The film starts with Dickinson telling her youngest daughter Polly, played by Robbie Lee, that she’s too young to get married. There’s tell-tale signs that that’s evident by the way the young girl clutches her doll baby to her breasts.

Inside the church, the wedding comes down to the vows before Dickinson raises her voice and says that it’s not going to happen. This causes quite the furor between her and the groom’s family. It all cultivates with the preacher screaming out: “This is goddamn blasphemy!”

So Dickinson and her girls get away from the hoopla by driving off with Uncle Barney. Little do they know, however, that Barney is wanted by the law for bootlegging. This introduces Dick Miller as one of the agents sent to arrest him. There’s a bit of gunplay and Uncle Barney ends up in the ground… but not before Dickinson takes his ruby ring.

After this, Dickinson momentarily takes over the bootlegging business. There’s an amusing scene where she’s to deliver the goods to a whorehouse, but ends up at the wrong residence and runs into a tee-totaling old woman who smashes the whiskey bottle and pronounces fire-and-damnation.

Ultimately, they get arrested. Dickinson has to hand over all her money – and Uncle Barney’s ruby ring – to a crooked sheriff, who does little more than lick jelly roll innards from his fingers, to get off the hook.
We next see Dickinson working as a waitress. While she’s doing time at the local café, her daughters are out stripping at the local VFW. While they don’t get down to their bare essentials like the stripper, they have a fun time dancing around on-stage in front of these perverted old men. That’s until Dickinson shows up, however, waving her pistol around. Shooting a few bullets into the ceiling, she gets her girls and high-tails it down the road.

Still in pursuit is Dick Miller. In one scene, his character is made to look rather ignorant. Dickinson and her girls are stowing away on a church bus while Miller is outside looking for them in the crowd. Why he just doesn’t board the bus is beyond me. Instead, he lets them get away. This escape, by the way, leads Dickinson to grabbing a car from the crooked preacher and leaving him behind in their dust.

Now broke, but vowing to get her girls to California, Dickinson hatches a plan to rob a bank. While in the middle of the hold-up, they’re interrupted by two other criminals who have the same idea. This introduces us to Tom Skerritt, playing Fred Diller. His partner being blown apart by a shotgun, Fred takes off with Dickinson’s family as they make their escape.

Now rich from the robbery, Dickinson and her family, along with Fred, hole up at an abandoned farmhouse. So begins the love tryst between Dickinson and Skerritt.

But wait! Dickinson meets William (THE SHAT) Shatner, playing a “rich” country boy from Kentucky, at a horse race and immediately falls with him into bed.

If you’re head isn’t spinning from all the sexual antics playing out, the film keeps rolling as another heist is planned. This is to be the final big one, the one that will set Dickinson and her family up for good in the sunny state of California.

Does the robbery go as planned? You’ll just have to watch BIG BAD MAMA to find out.

The film was directed by Steve Carver, who would go on to helm such films as Chuck Norris’s LONE WOLF MCQUADE. He does a good job of setting up his scenes, giving the film a “dirty and dusty” quality. However, his direction is frantic, giving the film a bad pace. Take the scene where Dickinson is suddenly a waitress, nothing is ever explained to how she got the job. Nor is there any meat to the fact that Skerritt joins the gang. He’s there, one moment, yelling at them and the next he’s their long lost buddy.

There are also plot-holes that you could drive the proverbial truck through. My favorite has to be when Skerritt gets shot in the leg during the first bank robbery. After this, as he’s hopping into bed with every woman in the Dickinson clan, we never once hear about his wound again.

Angie Dickinson, doing her best to separate herself from her role as Pepper on TV’s POLICE WOMAN, does a great job in the film. It’s a blast watching her being foul-mouthed as she shoots off weapons. She also gives it up fantastically for her sexual side. Unlike her later role in DRESSED TO KILL, where a body double would stand in for her, Dickinson shows up completely naked in this film. She shows off her full-frontal nudity and, to this reviewer, that was one heck of an eye opener!

THE SHAT does the best he can, though his accent will leave any self-respecting southerner with a giggle. Tom Skerritt is also decent in his role. Dick Miller, when he’s not being played for a fool, is simply Dick Miller. You either like the guy (and any drive-in fan who doesn’t should turn in their badge) or you don’t.

As most of my readers know, I’m a sucker for downbeat endings. BIG BAD MAMA delivers on this scale. The scene plays out for a happy finale before you’re slapped in the face with the fact that everything isn’t hunky-dory. The way the scene goes to black with crying on the soundtrack is the only way the film could’ve ended.

Do I recommend BIG BAD MAMA? Does Angie Dickinson have enough wool to knit a sweater? Oh, most definitely.