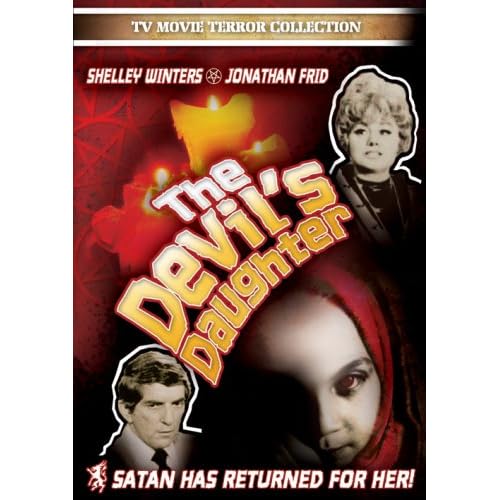 Satan Has Returned For Her!

Remember in the 1970s when there seemed to be a “devil” movie coming out every week. It was almost as bad as the early 1980s when there appeared to be a new slasher arriving at the multiplex every seven days. Satanic titles like THE EXORCIST, THE OMEN, ROSEMARY’S BABY and countless others were feeding the public their Satan fix. And lost in the entire hubbub was a little 1973 made-for-TV movie called THE DEVIL’S DAUGHTER. Did it hold its own against the big boys? Well, read on bunky and find out for yourself!

The film opens with Diane Ladd being murdered by three Satanists. She’s fighting them off with a venomous speech, telling them that they’ll never get their hands on her 21-year-old daughter. In one of the film’s most humorous moments, she’s shot in the shoulder and wiggles down to the floor. I never knew a shoulder wound would kill you so fast! Among the three murderers, there’s one feller who shuffles along on a walker. And yeah, he’s going to play a major part later in the film.

We now move along to Ladd’s funeral. Her daughter, played by Belinda Montgomery, meets Shelley Winters. Winters prods the young girl to come stay at her house with her. It seems that she had been a good friend of Diane Ladd and is more than pleased to help her daughter out. Montgomery immediately jumps on the chance and jumps in the nearby car with Mr. Howard (mute but not deaf), played by DARK SHADOWS stalwart Jonathan Frid.

Now, we already know Winters is going to be a Satanist. And that’s not a spoiler, folks. I think the large painting of The Devil hanging on her wall gives it away.

So Montgomery spends a few days at the mansion. While there, she meets an odd couple known as the Poole sisters. They give away subtle hints to Montgomery’s ancestry, all to the evil eye of Winters.

Montgomery is also given a ring, by Winters, which bears a strange symbol. To compound matters, she keeps seeing the symbol on everything from The Devil painting to Winters’s cigarettes. Winters tells her that it’s probably a Spanish symbol. Montgomery poo poos the strange feelings and dreams she has and continues on her merry way.

She also seems to disregard Mr. Howard. Frid gives her silent warnings about the ongoing events in the house. This is especially poignant when Montgomery stumbles across a book (bearing that symbol) that shows her mother, Winters, and a host of others dressed in black ceremonial garbs. There are also quite a few pictures of Montgomery as she’s grown up through the years. This sets the young girl to thinking, but much isn’t made of it.

Taking the advice of her preacher, played by Ian Wolfe, Montgomery moves out of the house to share an apartment with another young girl. This doesn’t go over well with Winters, who literally blows her stack. She attempts to get Montgomery to stay, but the young girl blows her off and still moves out.

At her new apartment, Montgomery meets Steve Stone (played by Robert Foxworth, who would do double satanic duties by also turning up in DAMIEN: OMEN II). Stone is dating Montgomery’s roommate, Barbara Sammeth. Unfortunately, Sammeth doesn’t survive her date with Stone. For her troubles, she’s trampled by her horse (in an off-screen death).

Montgomery, who had a dream that Sammeth would be killed, immediately falls into the open arms of Stone. I’m talking about maybe two days and already Sammeth is forgotten. Montgomery is all over Stone. They’re kissing, going to the movies, and Sammeth’s corpse isn’t even cold, yet. So, how long do they grieve? Maybe an hour before they’re headed to Stone’s mother’s house. And that’s where they announce they’re getting married!

Back home, Montgomery attends a party that Winters is giving her. It’s here that she also meets Abe Vigoda and his eyebrows. He tells her about a ritualistic dance that Montgomery immediately performs, throwing herself around in orgasmic throes. This is also where it’s revealed that she’s Satan’s daughter. Montgomery freaks out and leaves the “well-doers” behind.

Talking to her friend, Judge Weatherby, played by Joseph Cotton, she asks him to give her away at her wedding. He agrees and the ceremony appears ready to go off without a hitch.

For a TV movie, the ending is rather creepy. I won’t give it away, but suffice to say, even though you’ll see it coming from a mile away, it still packs a punch.

Jeannot Szwarc, who would later helm JAWS 2, does a great job with the material. There are wild 1970s psychedelic moments and a dread that never seems to leave the film.

Shelley Winters chews up every scene she’s in. She’s a regular tour de force as she prods Montgomery around the screen. She’s definitely the star of this film even though you can tell it’s a vehicle for Montgomery (who is equally impressive).

I wasn’t expecting much going into the film, figuring for a rarely seen 1973 made-for-TV outing that it would be rather mundane. Boy, was I surprised! My low expectations really helped. I was blown away by the film, even though it’s paint-by-numbers and you’ll see the twists-and-turns well before they appear on the screen.

The performances are strong, and Szwarc’s direction is tight. You’ll also get giggles from the unintentionally funny scenes and the cheesy 1970s F/X.

This film is available on DVD from Wild Eye. The print is rather shabby, especially the beginning, but you’ll forget about its lackluster appearance as you’re drawn into the movie. The disc is barebones, but I’m really glad the company made this one available.

Do I recommend this film to drive-in viewers? Most definitely! It’s ripe for the fondue fanatic.

So pop your Jiffy popcorn, slide across the shag rug, and plop down on your gaudy couch to catch this 1973 TV movie.

I highly doubt you’ll be disappointed.

All hail the Devil’s daughter, princess of the dark!