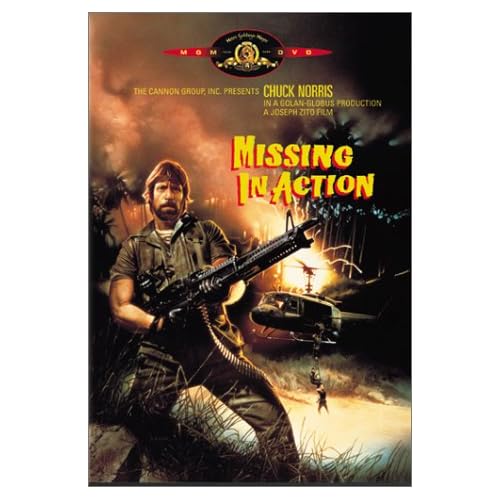 Ah, the things they used to shoot outta Cannon...

Yes, it's those kings of 80s exploitation: Golan-Globus! This time around, our favorite producers wanted to lick at the heels of Sly's FIRST BLOOD and take their own gander at an American who can't cope with the horrors of the Vietnam War. However, instead of showing their Joe having a hard-time with the home field advantage (a'la John Rambo), Cannon unleashed their version back into the jungles of Vietnam. And who did they pick to lead the charge? He whose name screams exploitation: Chuck Norris!

So, are you ready to blow-up some bamboo huts and bury half-a-million evil Viet Cong? If so, follow me:


Surprisingly, this film isn't as cookie-cutter as many of the later Norris vehicles. Before jumping the tracks and getting down to some serious 'sploitation action, it appears as if the filmmakers are actually taking a firm stance on the M.I.A. issue. If this was anyone but Cannon, those issues might have been strained throughout the remainder of the film. Be it as it is, however, those are soon left in the debris of Norris's hotel room in Ho Chi Minh.

The plot is simple: Norris, once a P.O.W., returns to Vietnam to investigate the possibility of surviving M.I.A.'s. Naturally, he finds the sufficient evidence and goes on the warpath.

The strong point of this film is director Joseph Zito, best known to the slasher genre for delivering such fare as THE PROWLER and FRIDAY THE 13TH THE FINAL CHAPTER. He manages to imbue the film with a gritty eye for detail and dark hues - all of which work to dramatic conclusions.

Though the meanderings are rather inconsistent - with characters serving a purpose then disappearing - let's face it: If you're watching this film, it's for Chuck Norris and what he can do. It's that simple.

Still, you'll get to see M. Emmet Walsh (if you don't know who he is, pack your bags and leave this review immediately) in a Hawaiian shirt helping against the Commie hordes. That's price enough for the admission!

This film can also be remembered for raising quite the hubbub when it was first released, supposedly for its “cruel depiction” of Asians. Though it didn't cause the fervor of the following year's RAMBO: FIRST BLOOD PART II (1985), it certainly bought enough attention to spawn two sequels.

Memorable scene: The oft-80s copied machine-gun burpin' rise of Norris from beneath the water.


MISSING IN ACTION 2: The Beginning


The fans wanted it (didn't they?), so Cannon brings forth the episode detailing Chucky Baby's time imprisoned in a Viet Cong P.O.W. camp. And, if you listen to anyone who has watched these films, they'll tell you - 99.9% of the time - that this is the most “enjoyable” of the trilogy to watch.

Are they wrong? HELL NO.

This is ripe for the fondue fanatic! Want revenge? Watch as Chuck dispenses it in lethal doses... as his feet are chained together! Want sympathy? Cry at the death of a chicken! Want balls out bravado? You try chewing a rat into two pieces! Did I mention you have to be hanging upside down, with a bag over your head?

Yessah! This one is a fun ride. And, if you can remember the “Vietnam Craze” of the mid-80s, there's the chance you caught this one on a double-bill with the original M.I.A. film (which usually left fans miffed that they didn't play this one first).

Suffering from a claustrophobic setting, since the majority of the film plays in a concentration camp, there's also a ragtag group of recognizable faces to supplement Chuck. Soon-Tek Oh, who has played off of everyone from 007 to Cagney & Lacey, is our resident bad guy. His straight-faced delivery and villainous smile are fantastic! Professor Toru Tanaka makes for an imposing “Odd Job”. While Steven Williams, who survived the Blues Brothers but later succumbed to Jason Voorhees, adds his “I'm not a traitor!” qualities for a subplot to the film.

Finally, just as a reminder, if ever a bad guy is shooting at you, make sure to simply run around while performing crazy Benny Hill-esque antics and he'll be sure to miss you every time!

Trust me, try it!


Oh man. Now this one is just bad!

Chuck teams with director brother Aaron this time out to again step back into the pre-MISSING IN ACTION days of Colonel James Braddock.

This is a schizophrenic mess, and that includes my hatred of films which change their sequel nomenclature to roman numerals later in a series (does that make them feel more sophisticated?).

Either way, the plot is that Braddock mistakenly sees his wife die (btw: this happens during the fall of Saigon in 1975, the same time Chuck was suppose to be in the prison camp from Part 2). He believes his wife dead because he views a charred corpse wearing her bracelet.

Anyway, a few years later he learns that she's not dead - all from a Vietnamese priest who travels to America to tell him (wouldn't it have been easier just to call?). But he’s shocked to learn that not only is she alive, but that he also has a drum roll SON! So, proving that he's a man when it comes to his relationships, Chuck dodges the C.I.A. and heads back to rescue his long-forgotten family. And, just for the helluva it, makes time to free a bunch of Vietnamese orphans from the Commie hordes, too!

It's all a rather painful affair, but you'll be rewarded for your endurance with faces like Jack Radar and Keith David; not to mention learning how to knock someone out by kicking them in the leg(!) and hearing “classic” lines from Chuck like his venomous retort to the C.I.A.: “I don't step on toes, I step on necks!”

If you're truly into masochism, stick around for the final credits and endure the “theme song”. I dare you.

These films have been wrongly dubbed “Missing Action”, when there's nothing further from the truth. It's all basic Chuck Norris fare and, though you could do better with his 70s and early 80s output, these are worth tagging along just to say you've seen them.