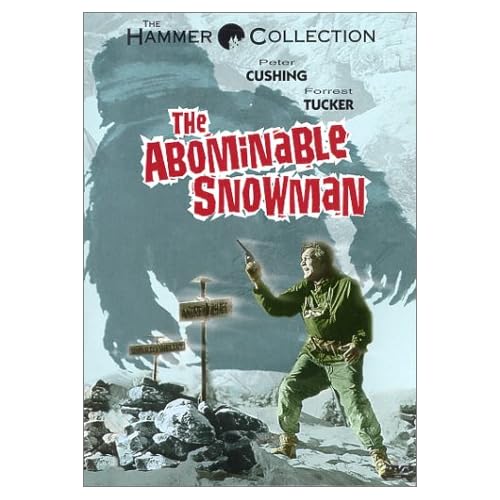 See It With Someone Brave!
A Timeless Terror to Freeze You to Your Seats!


Before Hammer made it big with the flamboyant sights of THE CURSE OF FRANKENSTEIN (released the same year as THE ABOMINABLE SNOWMAN – 1957) and HORROR OF DRACULA, they were still making films in black-and-white. And, up to this point in Hammer’s history, they’d only had one hit: THE QUARTERMASS XPERIMENT.

It was to the screenwriter of the QUARTERMASS films that Hammer next turned to: Nigel Kneale. He’d recently had moderate success with a 90-minute teleplay called THE CREATURE that was the seed of THE ABOMINABLE SNOWMAN’s origin.

How does Hammer’s foray into the Himalayan Mountains fare? Let’s strap on our cold weather gear and go along for the expedition:

The film opens in a Buddhist village. Hammer stalwart, Peter Cushing, playing a scientist by the name of John Rollason, is digging into the Buddha secrets. He’s assisted by Richard Wattis, playing Peter “Foxy” Fox, and his wife Maureen Connell. Cushing is making headway with his findings, but what he truly wants is to find and examine a Yeti.

It’s here that we meet Forrest Tucker. Tucker is playing Dr. Tom Friend, the head of a team of men who are prepared to brave the snowy mountains in search of the creature.

Cushing, who had an earlier accident while mountain climbing, is to join the team. He goes against the wishes of his wife, who vehemently tries to persuade him from going. Even Foxy is against the idea. But Cushing pushes them both aside. There is a mania driving him that he must see one of the creatures alive.

The night before they’re to leave, Tucker shows Cushing a strange Buddhist object. It’s a metal cylinder that hides a large ivory tooth in its center. Cushing takes it to the head of the Buddhist colony who does, indeed, confirm that it’s the tooth of a Yeti.

The team is excited by the find, and is now sure they’ll see one of the Abominable Snowmen in their natural habitat. So, they trek off with glee in their eyes.

On their way, they’re fired upon by three men who appear to be following them. Strangely, this mysterious trio of men disappears from the storyline and is never referenced, again.

Meanwhile, one of the party has accidentally stepped on one of the traps left for the monsters. It snaps his ankle, and Cushing takes him under his wing for medical care.

While treating him, there’s excitement from the rest of the team. They’ve trapped a Himaylan monkey which their guide swears is the Yeti. Cushing sets everyone straight that what they’ve captured is from the creature.

However, as the team squabbles over the find, a real Abominable Snowman breaks the monkey free. The exhibition bands together and the creature is shot and killed.

Unfortunately, their guide is spooked and runs off the way they’ve come, heading back towards the village. The team lets him go without a second glance.

Our wounded man, who has seen a glimpse of the creature trying to get inside his tent, also flees. As he’s scooting away, loud shouts from the rest of the team set off an avalanche. As he’s buried alive, I’m sure the man forgot all about his broken ankle.

Now they’re only three men left in the team.

As they set a trap to capture one of the creatures alive, Cushing and Tucker finally face one another. Cushing wants one of the Yetis’s to study, to break medical science. While Tucker wants one to show off to the public and make money. Cushing, in his British accent, scolds him: “You're nothing but a cheap fairground trickster!” It’s a line that sounds unintentionally funny, but is quite poignant within the film.

Back at the village, Kusang, the group’s guide, has finally arrived. He tells everyone about the Yeti, and this sets Cushing’s wife and Foxy to form a ragtag group of team members to set out to find Tucker and Cushing.
In the meantime, Cushing and Tucker continue to clash. The third man of their team has been literally scared to death by one of the abominable snowman. Cushing discovers that Tucker has given the man dummy rounds for his rifle, and involuntarily committed murder.

Finally, left to his own devices, Cushing confronts the Yeti as the film races towards its conclusion.

Director Val Guest, working from Neale’s screenplay, does an excellent job. The way that he shoots his film, in stark black-and-white, is magnificent against the snowy background. There are actual times that one can feel the chilly cold emanating from the television screen.

Peter Cushing and Forrest Tucker are terrific in their yin/yang performances. I have to admit that it was rather humorous to see Tucker take top-billing over Cushing, especially in a Hammer film. Nonetheless, both are wonderful in their roles.

The rest of the cast are your usual 1950s monster movie regulars. There’s the screaming girl, know-it-all scientists, and “Hell yes I’m scared!” extras that are little more than cardboard cut-outs.

The strange thing about this film is that while I was watching it, I was pretty bored. I thought it was a mundane Hammer outing. But then, as the conclusion began to smash its way towards you, I fully realized that I had loved every minute of it. I’m not sure how sense that makes, but it’s the truth. The film truly left longing emotions for me.

I’d also like to mention the ending. Just when you thought the film was over, there was a epilogue that really sucked a bit of wind out of the story. There was a chance for a truly downbeat ending that has the rug pulled out from the viewer. Does it ruin the film? Oh, far from it. But I do believe it would have worked better with the quiet finale.

The film is easily recommended from your faithful reviewer. Unfortunately, the DVD is way OOP and demands high prices on the selling block. Nonetheless, it’d be worth your time to track it down.

As the Llama proclaims at the end of the film: “There are no Yeti.”

I beg to differ. Strap on your snowshoes and venture into the Himalayans. I seriously doubt you’ll be disappointed with what you find.