Calling all you cornfed dames Lux means bucks, remember the name! Go put on something real loud Let’s get up and go get plowed!Lux Interior passed away almost one week ago. I’m still numb from the shocking news. We’ve lost a lot of greats in recent memory. Heck, it never stops. Death never lets his [...]

Calling all you cornfed dames
Lux means bucks, remember the name!
Go put on something real loud
Let’s get up and go get plowed! 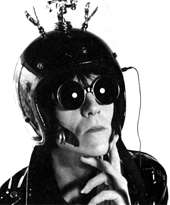 Lux Interior passed away almost one week ago. I’m still numb from the shocking news. We’ve lost a lot of greats in recent memory. Heck, it never stops. Death never lets his scythe rest for very long. The most recent loss was Forrest J. Ackerman. That was painful, but we all knew for a few years now that it was only a matter of time. He lasted longer than many of us thought he would.

But the news of Lux Interior, the lead singer for the venerable band, The Cramps, was shocking and completely unexpected. I took it like a kick in my gut and I still can’t quite grasp it.

I began listening to The Cramps in the early 1990’s. I bought a copy of Stay Sick in the bargain section of a music store and I went home and listened to it. I thought it was pretty funny, but largely I was less than overwhelmed. But I kept going back to that album and it began to grow on me. More and more I listened to The Cramps and I increasingly became convinced that they were the greatest rock and roll band of all time.

Rock and Roll. Has there ever been a term more misinterpreted than that? So much has been called Rock and Roll, from that generic Neil Sedaka crap to corporate controlled modern rock of today. There’s very little genuine rock and roll out there. Rest assured, The Cramps were the real deal. Raw, unbridled, unfettered, untamed and more than a little bit scary. Simply put, The Cramps music is befitting for hardcore music lovers who have a knack for music. Those who are into pop-rock are better off trying other music. 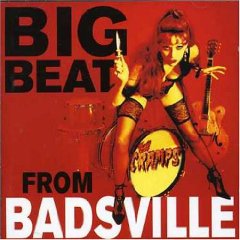 The Cramps sang about the vital elements of trash culture. Sex, cars, sex, monsters, sex, drugs and still more sex. Their music throbbed with sexuality, as did their entire stage presence. For what is rock and roll but the beat to screw to? Trust me, you haven’t experienced rock and roll until you’ve beheld Lux doing his deranged version of Surfin’ Bird.

Another misrepresentation of The Cramps is that they were a punk band. Yes, they were there alongside the original punk bands in CBGB and Max’s Kansas City in NYC in the 1970’s and it’s natural to lump them with that scene, but the roots of The Cramps were always in rock and roll and yes, even country. Hillbilly music. Greaser ballads. 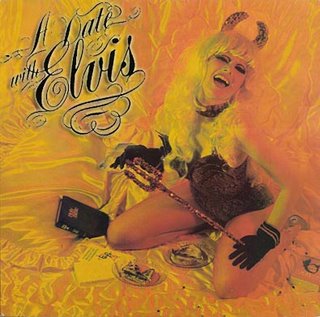 The Cramps were and are the perfect drive-in band. Their music is filled with references to classic (and not-so-classic) horror and exploitation movies. 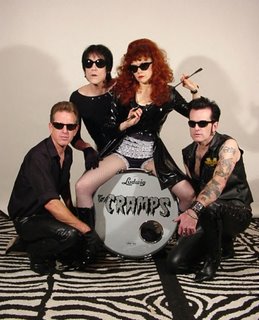 Imitators of The Cramps have come and gone, by the hundreds. Some are good and others aren’t so good. People often try to tell me that I will definitely love this or that group, because they sound like The Cramps. In nearly all these cases I am acutely disappointed. I’m not so much a rockabilly fan as a fanatic of the music of The Cramps.

Most fans of The Cramps think that the band’s early music is their best and that they started to go bad with A Date With Elvis. Once again I am in the minority in that I always thought that the first album kinda sucked. It had cool attitude and some rocking beats, but I hated that untalented Bryan Gregory guy on guitar. I think that they really came into their own with A Date With Elvis and that all of their albums after it are fucking brilliant. 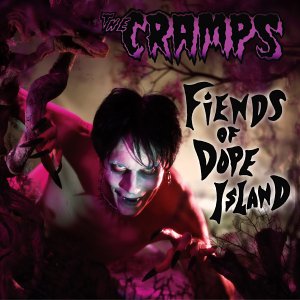 And the best thing about Lux Interior is, he never gave an inch. No compromise whatsoever from his warped, perverted rock and roll vision. The band had numerous legal battles with record companies and for periods of time they couldn’t even record music, but they eventually gained all the copyrights for their music and had their own label. If anything, the band got weirder and more outlandish as time went on. You only have to look at the cover of their final album, Fiends of Dope Island, to see that.

It’s been almost a week since I heard the shocking news that Lux Interior had died. Part of me died when I heard it. Discovering The Cramps was such a liberating thing for me. The music quite literally changed my life and everything about it.

A lot of people are mourning the loss of Lux and that’s cool. But I wonder how many have kept up with The Cramps over the years. How many actually bought Fiends of Dope Island. If you’re reading this and you did, Elvis Bless You.

Since I heard the tragic news, I’ve had nothing but The Cramps in my player at home. I have no desire to hear anything else. I have no CD player in my car and on a road trip last weekend, I was trying to listen to the radio and everything I heard sounded so lame. So lacking in guts and passion. So weak and uninspired. The music of The Cramps is a celebration of life and its glorious excesses. And though they sound nothing like anything from Motown, I consider them a soul group. For the music is so genuine and so honest.

You may have known him as The Goo-Goo Muck. Maybe Thee Most Exulted Potentate of Love. Or possibly as Elvis Fucking Christ. Maybe as The Creature From The Black Leather Lagoon or an It Thing Hard On. Lux Interior had many guises and he was brilliant in them all. But now he’s gone and music will never recover. As a friend of mine said, “Rock and Roll really is dead now”. 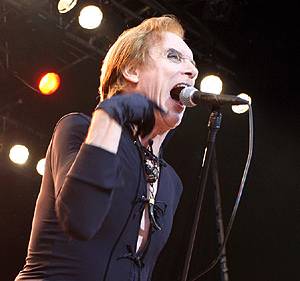 I hope you aren’t resting in peace, Lux. I hope you’re raising hell and the happy face fucks around you are pissing their pants. Even the Devil would get dizzy trying to keep up with you.

Now let’s raise a glass or whatever your pleasure may be and salute the man and the band. And we’ll mourn the passing of one of the last true rock and rollers.

Lets get fucked up – The Cramps

Oh and finally, my heart goes out to Poison Ivy Rorschach. It’s pure hell to lose a life partner, especially when one was as relatively young as Lux was. Hey, if any of you have been interested in checking out The Cramps or filling in the holes in your collection, or perhaps replacing those old worn out vinyl and cassettes, now would be a good time. I’m sure that she could use the support. Death, as we all know, is not only painful, but expensive.