Is there any place better for a kid to hang out at than railroad tracks?From the years of ago 13-21, roughly, I spent a lot of time near the tracks. A couple of miles from my house was a trail that led through some woods to railroad property. Then there was about a three mile [...]

Is there any place better for a kid to hang out at than railroad tracks?

From the years of ago 13-21, roughly, I spent a lot of time near the tracks. A couple of miles from my house was a trail that led through some woods to railroad property. Then there was about a three mile stretch to a bridge, where I’d often leave the tracks and go to some stores. There was a great dept. store called Robert Hall Village that had a damned nice record selection. I got my Zappa LPs there, as well as oddities like Ruben and the Jets, Captain Beefheart and Flo & Eddie.

Anyway, the tracks were my favorite hangout. Me and my old best pal walked them endlessly, talking about every subject under the sun and making up elaborate jokes/stories about people we knew. There were woods surrounding them all around and we spent a lot of time in them too. We built a ground fort and a tree fort.

We didn’t want to be in the public eye. I learned early at home that being out of sight kept me out of trouble from the those that were out of their minds. If you catch my drift.

I went there by myself a lot too. I didn’t want to spend time at home and when I couldn’t find anyone to hang out with, I’d go to the tracks. Often with a book, but sometimes just with my thoughts. I distinctly remember one gorgeously windy Sunday afternoon when I took Bloch’s Psycho there and kicked back in some tall, soft grass and read the entire book.

As me and my friends grew into our later teens, we used the tracks and surrounding woods as our preferred party spots. We almost never saw anyone there and no one ever bothered us. We built fires and would spend the night in one of the forts. Once when we were about 19, we went to a midnight show of Night of the Living Dead and went back to the woods near the tracks and slept in a fort.

I remember one night on the tracks…we bought a sixpack and went out and before we had finished our first beers, they had frozen. We later learned that it had been 15 degrees out there.

That’s where we did our drinking. Back then you could legally drink at age 18, but we preferred the tracks to any bar. For one thing, it was a lot cheaper and for another, it was OUR place. And we had plenty of parties with girls out there. More than once our dumb asses carried a keg of beer a half a mile to get there.

Great memories. It was always so peaceful there, even when a train roared past, with its whistle blaring. Even that seemed to soothe us.

When I got a job doing construction work, the truck I’d ride to the site in would go over the bridge and I’d look out onto the tracks and wish that I was going there, instead of to a hateful working environment where dipshit rednecks thought it was great sport to constantly barrage the young workers with taunts and insults.

A lot of years have passed since I went to my old spots. But my subconscious never forgot and I dream about being out there all the time.

It’s not all that far from where I now live and there is a hell of a breakfast spot near there that we love to go to. Tanya and Europa are out of town this weekend, so I tried to do special stuff with India. We had breakfast and I was thinking about the tracks. I wanted to check it out again, but how to get out there? Park on a street and somebody would be liable to call a cop. Think we’re some sort of terrorists or something. But I went to a construction business and parked near there and we hurriedly got out and ducked into the bushes and down a trail to the tracks. Right under that old bridge.

I didn’t want to stay long, because I was worried about our van. I didn’t want to see it get towed. But we walked a ways…maybe a mile or so. Thankfully, it really hadn’t changed all that much. Yes, good old progress is creeping closer, but for the most part it could have been 1978 as I walked along. I had forgotten about a pipe that ran over a lake. We liked to sit on it and once I fell off it into a bunch of slimy muck. We saw some trainkill, of course, and it grossed India out. Just like it grossed me out when I first started going there.

Looking down the tracks, I saw someone ahead, heading our way. It was a teen and when he saw us, he veered off the track area and into the woods. Exactly as I did when I was that age. When I was out there, unless it was a friend that came with me, I didn’t want to see anyone. Especially any adults. I hope that kid spends a lot of time there and that he is getting the same kind of joy and peace that I always found on and around the tracks.

I wanted to stay, but as I say, I was worried about the van and India had soccer practice in a couple of hours. So we left, but not for good. I’m going back and soon. This time with a backpack and some bottles of water. Maybe some trail mix. I’m heading off the tracks and am going to explore the woods again. I don’t expect to find any traces of the old forts, but then again I don’t know what I’ll find. My youth? Well, that’s lost for good. But maybe I can find some of that old magic and put it back into my heart. You gotta keep fighting that old fogey that never stops trying to take over your life.

India is looking forward to going back. There’s something about walking down tracks. Something that might even be a part of our tribal consciousness. Train tracks represent escape and I escaped a troubled home and a world that I mostly hated by going there. And maybe that’s part of the reason why King’s The Body/Stand By Me is such a moving experience. Walking down the tracks is something romantic, rebellious. It feels like freedom, even if that freedom is only temporary. 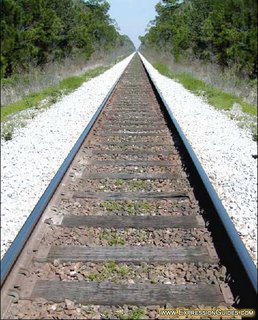