This past weekend was the first time that The Horrorfind Convention was held in March. It usually is in August and it still will be this Summer. This was a smaller con. To those that skipped it because they heard that it was smaller and fewer writers would be there…you fucked up. This was [...]

This past weekend was the first time that The Horrorfind Convention was held in March. It usually is in August and it still will be this Summer. This was a smaller con. To those that skipped it because they heard that it was smaller and fewer writers would be there…you fucked up. This was one of the best Horrorfinds ever. As genre conventions go, you don’t want them too small to the point where there is no one to hang out with, but too big can be a problem too. Intimate is often the best way to go. In this case 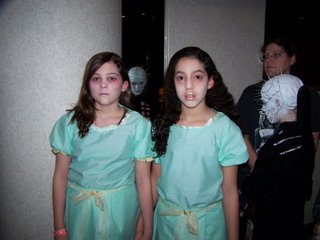 it was certainly the case. And for those that held off because of The World Horror Convention, well, judging from the nasty condescending attitude of a certain official there, I’d say that you made the wrong choice.

We arrived in Towson, MD around Noon on Friday. There weren’t many conventioneers there at that time, but I did run into my old friend James Newman early on. I’ve known James since 1999 and we’ve been incredibly tight ever since. He’s a great guy and a hell of a writer to boot. It was nice, too, to meet his wife Glenda at last. And see his son Jamey as well.

People began trickling in as the afternoon wore on. It would be futile to try to name everyone that I saw and hung out with. Because despite what you’ve heard, there were a lot of readers and writers in attendance.
I’ve been asked why I spend so much money to just go to a hotel and stand around talking to people. I love to talk and I love to talk about books even more. It’s not rare for me to be able to do so in the so-called real world, it’s impossible. So much of the time I spend at cons is merely talking to others in the community…readers and writers.
The great thing about Horrorfind is that it is primarily a fan’s convention. Yes, numerous professionals congregate there, but there is a refreshing lack of attitude there. Everyone seems to be there to celebrate the genre, not themselves. Sure there’s some self-promo, but with very few exeptions over the years, it’s kept in check.
But the main event of most conventions is the consumption of alcohol. Most of us like it enough to drink to excessive degrees. Some were incredibly intoxicated, but no one got out of hand. At least among the book loving members.
There was a panel on Friday Night that dealt with the pros and cons of genre awards. It was peopled by Tom Monteleone, F. Paul Wilson, Mike Laimo, Alexandra Sokoloff and Horrorfind employee Icki Nikki. Gee, I created an award for the horror genre called The Shockers and no-one asked me to be involved. Oh well.
Don’t let anyone tell you otherwise: the key to any successful panel is lots of alcohol.

It was a riot and a lot of thoughtful points were made about the question of the importance of awards.

Later that night we ended up at the Karaoke bar, of all places. I for one was bored out of my mind by it, but it was worth waiting around to see F. Paul Wilson take the stage to belt out a spirited redition of Elvis’s All Shook Up. Jack Ketchum later performed a demented doo-wop number (for lack of a better descriptive term).

The next day was a lot more populated and I spent the majority of it in the dealer’s room, despite having so little money to spend. I had to buy something while I was there and what better thing to own was the Borderlands Press limited hardcover of F. Paul Wilson’s Virgin? I bought it from Tom Monteleone and I talked to him quite a lot over the weekend. We discussed the things we liked about the genre, as well as the things we don’t like. I could talk to him for hours on end; about the classic books and stories that we both love, and about everything else under the sun. There is no one in the genre that I have more respect for than Tom.

As for the readings, I apologize to all my friends that have them at various cons I attend. I hate sitting through them. I get antsy and want to get up and walk about and talk. The only reading I refuse to miss is Tom Monteleone’s. Tom doesn’t merely read, he performs his stories. This time he read his story from Peter Crowther’s Narrow Houses anthology (and later reprinted in one of the CD Shivers books), The Wager. It’s a real favorite of mine and to say that it was a pleasure to experience Tom’s animated reading of it was more than a pleasure.

I don’t spend a whole lot of time in the celebrity rooms, but I did peruse them and I spent a few minutes speaking to the very friendly Lucky McGee. I liked May and Sick Girl a lot and Lucky is a hell of a cool guy. Very personable and unpretentious.

Later on we gathered in a room to partake of strong beverage. Here we experienced the glory of TomoView. TomoView is a project by a cool guy that calls himself Tomokato. He gives scathing reviews to the worst the horror genre has to offer. This time he read from a book called Deathbreed. It was written by The Visionary Overlord of American Horror, Todd Tjersland. Tomo read and several of us laughed and gagged. A great discussion followed in which we pondered the question of whether a writer that uses racist characters is himself a racist. Think you know the answer? Don’t be too sure until you experience Deathbreed. Me, I don’t think so, but I can’t be sure. No one in their proper mind could call Deathbreed a good novel, but if Tjersland’s goal was to shock and make readers laugh, I’d say he at least partially succeeded.

Later came the height of the convention for me: The costume contest. My wife’s friend Sasha brought her children and her daughter and ours dressed up as the creepy little girls from Kubrick’s The Shining. They were great and they won Best Homemade Children’s Costume and also for Most Original Costume. This was the first time ever that a kid won the latter award.

It was one of the proudest moments of my life and our India (on the left) was deliriously happy. They both won numerous prizes and a certificate.

God, what else? Jimster57 is one of the coolest and most well-read person on the planet and he bestowed incredible gifts upon a lot of us. Hanging with Beth Blue and Sarah Schonfeld is never dull and they, above all, know how to have a good time. I saw Allen Richards/B-Independent all too infrequently, I’m afraid to say. I met new friends like Doug Warrick and Scott Ican’trememberhislastnamesorry. KelliwithanI and her sister. Brian Freeman. Nikki. The list goes on and on, it seems.

The hotel was nice, but the staff were a bunch of dicks. Can you believe that they would allow us to carry beer from our rooms around the hotel??? I’ve been attending conventions for ages and I’ve never seen this kind of blatant greed before. Of course we got around that, but it was a pain in the ass and very insulting.

I’ve never been much for goodbyes and I leave the hotel early in the day most of the time. I lead a busy life here at home and I like to beat the traffic and get back as soon as I can. It’s always a bittersweet thing to go home to one’s routine, but we basked in our memories and looked forward to August when we can do it again. I hope that I see you there.