The Twilight Zone means a lot of things to a lot of people. Many equate the name with some of the best televised drama and fantasy to ever grace the small screen. Others think of it as a showcase for boogeyman Rod Serling. Still others consider the show an ivory tower of California Sorcerers like [...]

The Twilight Zone means a lot of things to a lot of people. Many equate the name with some of the best televised drama and fantasy to ever grace the small screen. Others think of it as a showcase for boogeyman Rod Serling. Still others consider the show an ivory tower of California Sorcerers like Richard Matheson, Charles Beaumont, etc. Then there are those that fondly recall the 1980’s revival of the show. These are all fine sentiments.

Me, I think of The Twilight Zone and one thing comes first and foremost in my mind. The magazine of the same name as the classic show, which ran in the 1980’s. I loved that zine with all my heart and I learned so much about the genre from editor T.E.D. Klein and later Tappan King. As well as the diverse writers whose words graced the pages. 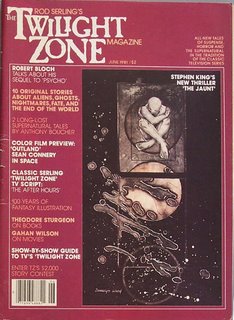 Today I was in a comic book shop and I found three issues of Night Cry Magazine for sale at an obscenely low price. I’m sure that I own them somewhere, but I picked them up anyway and I’ve been reading through them. The ones I got were the Spring, Summer and Fall issues from 1986.

How can I convey the love, the passion, the thrill I had from being a fan in those days? I loved that period of horror writing better than any other. I had been a science fiction fan for ages, but in the previous few years I had gradually been switching gears to become a full fledged horror fanatic.

It was a great time in my own life as well. After years of being ridiculously impoverished, I had a place of my own, even if I still couldn’t afford a car. There was a mall across the street and the B. Dalton carried Twilight Zone and Night Cry, as well as others I dug like The Horror Show. There were also two theaters with 8 choices of movies to see at any given time. It was a wonderful time to be a horror movie fan too. Things like The Fly, The LOST Boys, Night of the Creeps, Evil Dead 2 and many, many others were coming out all the time, and they showcased traditional special makeup effects. I’ll always love the movies of these period for that; even the ones that aren’t all that great.

The Twilight Zone covered film and fiction, as well as interviews, news and reviews in more or less equal parts. I discovered so many new talents back then in its pages. Skipp and Spector were riding high, and rightly so. They (among others) took the field by storm and went to places few dreamed about before that. Others in the list included David Schow, Ray Garton, Joe Lansdale, Chet Williamson and Richard Christian Matheson. It was great the way these upstarts shared space with established pros like Robert Bloch and Ray Russell. Something for every taste. 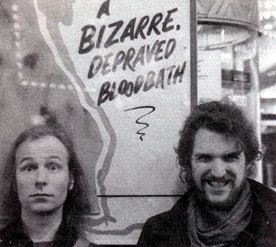 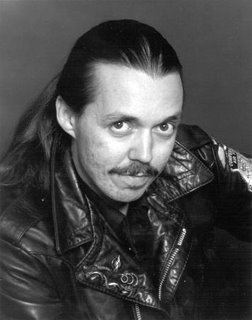 The issues of Night Cry I got today brought back such a flood of memories. Remember Thomas E. Sanders AKA: Nippawanock? To tell you the truth, I do now, but I had forgotten him. A young guy named Gary A. Braunbeck was in the Fall 1986 issue of Night Cry. So was Bloch, A.R. Morlan, Dean Koontz, John Maclay and Avram Davidson. J.K. Potter supplied the stunning art. The other issues had fiction by William F. Nolan, Jay Sheckley, Richard Wilson, Ray Russell, J.N. Williamson and of course, Skipp, Spector and Schow.

One night in 1989 I was at a party. We all indulged a bit too much and I honestly didn’t have a lot of fun. Everyone flopped on the floor and I woke early, feeling lonely and depressed. I thought about how I didn’t have a hell of a lot in common with most of the people I knew and that I was spending too much time out and not even having much of a good time. I came home the next day and, still hungover, I walked to the mall. There was the new issue of Twilight Zone and I happily grabbed it. The cover featured a sinister clown’s face on it and it had a Charles Beaumont story in it. I read it and felt so much at home in its pages. I felt that I really wasn’t all that alone in this world. There really were people like me out there and I wasn’t really that much of a misfit. I couldn’t wait for the next issue and you know what? It never came. That June 1989 issue sat on the shelf for about 6 months and it finally disappeared. The Twilight Zone Magazine had folded and I had no idea that it was coming.

I got over it. Most of us tend to persevere. But I missed it acutely then as I do now. The horror genre has gone in some incredible places since then. It hit heights and depths in the 90’s and beyond that few imagined when Twilight Zone and Night Cry were being published. I never dreamed that I’d actually get to know many of the field’s brightest talents and that I would have a miniscule influence on it. I was content to be a fan and I miss those days with all my heart. I grow melancholy at times, such as today when I read those old copies of Night Cry, but life is change and we can’t ever go back. That’s okay, I still have my memories and my old books and magazines and you know what? There are still a lot of exciting things going down in horror today and I have no doubt, in the future.