The Original Scream Trilogy, a Revisit and Review, and Anticipation for Scream 4

Many of us remember running out to the theater the weekend or the weeks after the first Scream film was released to see the “new revitalization of horror in cinema.”  I know I did, and I wasn’t disappointed.  I expect to be “not disappointed” again for Scream 4 which comes out today, April 15, 2011.

I am not going to re-hash plots because you can go to Wikipedia or a million other places for that.  Okay… fine… I’ll do a little.  Here is a little bit of the basic plot of the first Scream (directed by Wes Craven and written by Kevin Williamson):  One year after Sidney’s mother, Maureen Prescott (Lynn McRee), was raped and murdered, more killings start in the sleepy town of Woodsboro.  But this film is more than a psycho killer on the rampage.  It is smart.  It references many of your favorite horror films like Candyman, Friday the Thirteenth, Halloween,  A Nightmare on Elm Street, The Exorcist (with even a Linda Blair appearance), and many more.   It sets up, makes fun of, and falls victim to the “rules” of horror films in a fun and entertaining way.

I haven’t watched these films in about 10 years, but I own them on DVD in The Ultimate Scream Collection box set (if I had the newer Blu-Ray discs, I would have watched them).  So I pulled out my old DVD box set, dusted it off and popped them in one by one over a couple of day period. 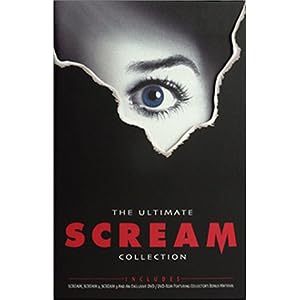 As I re-watched the first Scream, I found myself smiling and laughing and having a genuine great time.  This movie is an excellent, five star, good time to be had by most horror fans who love to laugh.  Some of it is very silly (cat door scene anyone), but some of it is genuinely scary (the opening scene is now a cinematic classic).  I ended up loving most of Stu Macher’s dialog (again).  If you know the ending and you re-watch the film, there are some great clues and lines that give you some very cool winks too.

Scream 2 (same director and same writer, yay).   With equal enthusiasm I popped in Scream 2 the next day.  The basic plot is that people have become obsessed with the Woodsboro murders and they’ve even made a popular movie about it. The people from the first film are trying to move on, but a new (?) killer (killers?) has sprung up.   It started off fine.  It was a little gorier.  Somehow, even though it has the same director and writer, the movie dragged to me.  It was almost a chore to finish.  I remember liking it the first time.  I think.  Maybe I wanted to like it so much that I did.   The “killer reveal” felt… well, it kind of dumb.   I still enjoyed it, but not as much as I hoped.   As I write this, I feel like I want to watch it again just to see why I have such mixed feelings about it.   Maybe there was too much going on.  The first film almost just had three locations, and this one was more spread out.   Scream 2 was also longer.

Scream 3.  Featuring a new writer (Ehren Kruger…great last name because of…)and same director (Wes Craven).  This DVD didn’t work in my fricking DVD player (I have a picky SOB Toshiba DVD player that only plays 40% of all DVDs), but it worked in my Blu-Ray player (thank you for the Christmas gift, Big Bro). A new masked man(or is it more than one?)  is terrorizing – okay killing – people to find out where Sidney is, and this killer has a new voice modulator that makes them sound like almost anyone.  Hollywood is filming Stab 3 and the actors on the film are being picked off.

There are some cool and strange cameos including Roger Corman (if you know who he is), Jay and Silent Bob (this sort of pulled me out of the film, but they made me laugh), Carrie Fisher (with a really funny line), and a couple others.

The film has a different, beat to it, so to speak.  It still works though. I didn’t find myself having to trudge through any slow points. The action is constant, and the acting is fun.   There are some pretty tense moments (one of which was kind of ruined for me because of bad foley and editing…the window attack scene), and I found myself having a genuine good time with it.  I remember when I first watched it, I was looking for the trademark killer formula of the previous two films and it sort of surprised and disappointed me.  This time I was giggling and having too much of a good time to really care.  Oh, and the ending is more than satisfying as a conclusion to the series, but then there is…

Scream 4 (which comes out today).  It is directed by Wes Craven (again, yay) and Kevin Williamson is back too (double yay).  There are a couple of loose ends, if you’ve been watching closely – like who raped Rina Reynolds…and some others I don’t want to speculate about – that might be covered in the new film.   To be honest, I’m not even going to seek out the trailer for Scream 4 before I see it… and I’m staying away from reviews.  What the heck are the “rules” for a tetralogy?  Most sets of four films have a prequel at the end.  There aren’t too many horror series that officially have 4 films. Of course, there may be a Scream 5 and a Scream 6 (a sexology?)…. If Scream 4 does well.  I expect it to do well.